This TORC essay is a comparison between studies reported in two separate papers; a new reforestation study from Algeria that is compared with a study we ran recently about research in desertified land in China called Karst rocky desertification does not erode ectomycorrhizal fungal species richness but alters microbial community structure.

In the Chinese study an international group of scientists compared the microbiome in two types of land in the Graben Basin region of China, desertified areas and old growth timber areas. The microbiome was robust in both types of land, but it was less diverse in the area with timber because of the increased fertility. The wide range of the microbiome found in the desertified areas represented niche populations where there were various factors unrelated to fertility affecting growth. The important part of this paper is that when considering the soil types they focused on the soil microbiome.

The Algerian paper is Effects of land use changes on the soil physicochemical properties in southwestern Algeria and has to do with Algerian scientists who revisit a previous group's reforestation project in the desert. It studies the impact of three tree species planted directly into desert soil, (Pinus halepensis, Cupressus sempervirens and Eucalyptus camaldulensis), and looks at the soil physicochemical parameters where the reforestation was performed. What is missing is a detailed look at the soil microbiology to learn how the microbiome interacts with the different trees.

The [new] study was realized on soil samples from the Touadjeur site. One hundred soil samples were taken from the field, followed by physicochemical analyses in the laboratory. A comparison of the soil elements between reforested and unreforested sites considered as a control was carried out. The results show that there are differences in the physicochemical parameters of the soil between the reforestation and the non-reforestation ones constituted by a steppe vegetation. The ANOVA one way test shows a highly significant difference change in soil physical parameters, moisture, holding capacity and saturated hydraulic conductivity, but no change in apparent density, actual density and color. Also, from a chemical point of view, the differences concern the organic matter, organic carbon, pH and certain soil contents. The main differences in soil properties between the reforestation sites and the control site, reflect the consequences of forest management adopted by the forest services, most probably the choice of reforestation species.

In the paper Soil Physicochemical Properties, scientists from the University of Saida in Algeria report on the ecological consequences of the introduction of woody species into degraded arid and semi-arid lands. This study, based upon soil samples in an established plantation area, shows results following an earlier project:

We are interested in the reforestation project that was carried out in 2007 on 400ha by the use of three forest species (Pinus halepensis, Cupressus sempervirens and Eucalyptus camaldulensis). To show the impact of land-use change on the modification of the soil physicochemical parameters, more precisely the effect of reforestation practices that lead to change in the soil structure and the modification of the organic contents and mineral elements.

The impact of each tree species on soil chemical and biological activity over the breadth of the 400ha (988 acres) could be compared because of the homogeneity of the soil through the steppe area as well as the same elevation and amount of water – the only difference was in the species of tree planted in each portion of the plot. There were 1,600 trees planted and the site can be seen on Google Earth if you enter the coordinates 33°25'07.39" N 0°17'00.15" W in the search box. The trees (common names) are the Aleppo pine, the Mediterranean cypress, and the eucalyptus from Australia called the Red River gum. The pine and cypress are native to Algeria.

The Algerian study looks at soil moisture, acidity (the result of water percolating through decaying leaf litter accumulating on the soil) in the areas where each species of tree was planted, compared to nearby spots with no trees. They examine the porosity of the soil, but there is no mention of the larger microbiome and only one mention of seeing fungi: "In addition, decaying organic matter and soil microorganisms, particularly fungi, can lead to water repellency" –They consider soil porosity to be the "first factor of soil fertility" (231). At this point the study essentially fails, because if they had done as the scientists in the Chinese study did and looked at the microbome, they would have been able to compare the soil health in each plot and see what microbial activity accompanies each species, etc.. 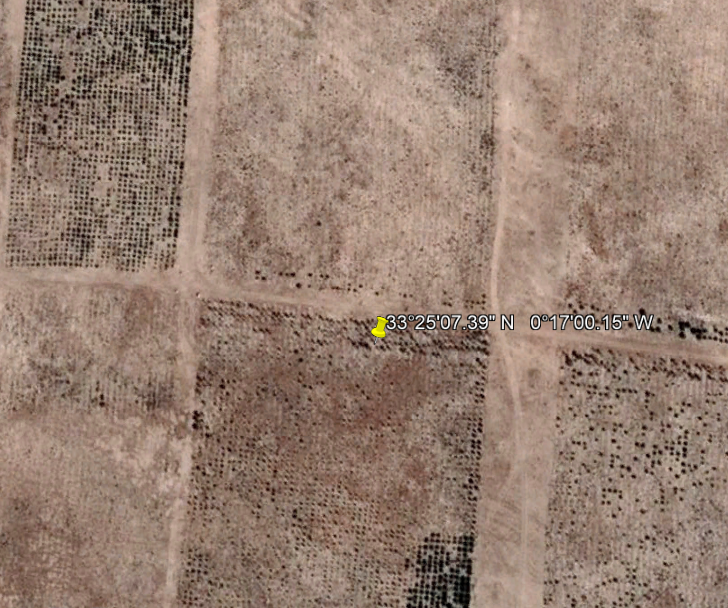 How trees grow and what they do to the soil around them, how they help retain water over time, what their leaf litter does to enhance the soil microbiome, we won't get all of those answers from this study. This study looked at the effects these three species had on the soil when planted in the arid steppe region between the Atlas Mountain ranges. The authors goal is to see data gathered that looks at the species planted in the "fragile soils of intermediate fertility." The understanding of the mechanisms of that fertility are the missing part of the study.

This is published in an Open Source publication Ekologia (Bratislava) from the publisher Sciendo, and can be found at the durable link https://www.sciendo.com/article/10.2478/eko-2020-0017 (A note about the paper title: Algeria is very large and the Atlas mountains in this study are parallel ranges near the coast and inland, and are in the northwest of the country. The "Southwest" in the title may be a mis-translation or refer to a provincial region?)

A TORC comparison of the studies:

Scientists around the world have been looking at the environmental problems in their given regions and are seeking solutions that align with what they know about those regions, down to a granular level. Restoring degraded land to a previous healthy state and at the same time capturing carbon and improving conditions for various species is part of it. Land managers and farmers are trying both ancient and modern methods to restore land to previous states of being.

The idea promoted by the Dirt Doctor and many other organic researchers is to restore soil by starting with the simple act of adding material that will break down and begin the restoration of the microbiome. This might be hay as in the early organic gardens of Ruth Stout, or shredded native tree trimmings as Howard Garrett recommends when restoring barren acreage, or like the land restoration advocates in Permaculture or regenerative grazing, giving the microbiome compost or manure to work with to start. Whether they knew it or not, the land use managers who started using compost and manure were treating the microbiome well and have more success in their restoration programs.

The problem with the Algerian study – it was incomplete

The study of effective reforestation planning took place in the steppe region in northwestern Algeria but it isn't enough to just plant trees in an area to address deforestation problems, it is important to use methods so the trees can then offer benefits to the land and biological elements of the region.

The practice in American forestry-management is to plant logged areas with a grid of seedlings of a desirable timber species. These plantations of mono-culture trees species may be native to the region, but the density allows for disease and spread of pests from one tree to the next should infestation occur. The health of the soil is rarely considered, with the exception of whether to burn slash before planting to release nutrients and help plant the new trees in mineral soil to benefit the seedlings. (This method was not described in either paper being discussed, this is an observation of how American foresters have typically approached reforestation.) The Algerian research paper looks at afforestation, "the act or process of establishing a forest especially on land not previously forested." Afforestation is a project often times sponsored by governments and non-governmental organizations that is intended to create forests to both attract more moisture to a region and increase carbon capture, a goal stated in several recent planetary-wide environmental conferences. The Algerian approach, as with the US timber industry approach, misses an opportunity to restore the land when putting in their monoculture plantations and by not starting with something to stimulate the microbiome. 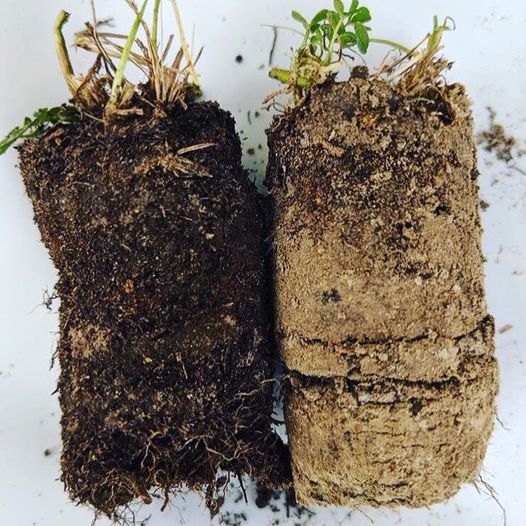 For this kind of planting to be truly effective, the species planted need to interact with the local niche as far as soil type, available rainfall, and building the soil health to benefit the fungus, plant, insect, and animal species that will move in with the arrival of a forest and the climate benefits of increased rainfall (that tends to happen) and carbon sequestration.

A criticism of this Algerian study as it stands is that while looking only at the sandy soil content and the surviving trees they weren't able to get a full answer about how to build up an afforestation program. Until they add the microorganism component to the study and act accordingly, the answer may escape them.

This study shows the impact of the reforestation program by some tree species (Pinus halepensis, Cupressus sempervirens and Eucalyptus camaldulensis) on the soil physicochemical parameters in south-western Algeria steppe. The study was realized on soil samples from the Touadjeur site. One hundred soil samples were taken from the field, followed by physicochemical analyses in the laboratory. A comparison of the soil elements between reforested and unreforested sites considered as a control was carried out. The results show that there are differences in the physicochemical parameters of the soil between the reforestation and the non-reforestation ones constituted by a steppe vegetation. The ANOVA one way test shows a highly significant difference change in soil physical parameters, moisture, holding capacity and saturated hydraulic conductivity, but no change in apparent density, actual density and color. Also, from a chemical point of view, the differences concern the organic matter, organic carbon, pH and certain soil contents. The main differences in soil properties between the reforestation sites and the control site, reflect the consequences of forest management adopted by the forest services, most probably the choice of reforestation species.

Passing one paper over another, the process of comparing these studies, gives us insight into the direction that future research needs to move and what elements should be included.