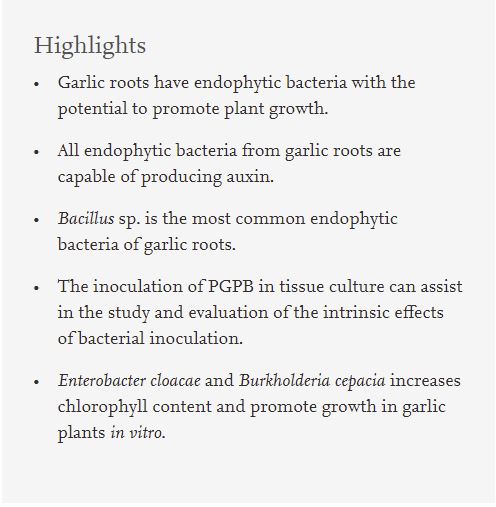 Garlic (Allium sativum L.) is one of the crops whose economic importance has increased considerably in recent years in Brazil. The use of plant growth-promoting bacteria (PGPB) is a useful alternative for reducing the cost of agricultural inputs and, consequently, for increasing productivity. Therefore, the main objective of this work was to isolate and evaluate potential growth promoters in plants and plant pathogenic fungi growth inhibitors using endophytic bacteria from garlic roots and bacteria from the Agricultural Microbiology Culture Collection at the Federal University of Lavras. Besides verifying improvements in the growth and physiology of garlic meristems grown in vitro under the action of PGPB. Forty-eight endophytic bacteria were identified using matrix-assisted laser desorption/ionization-time of flight mass spectrometry based on the protein profile of each isolate. Four isolates were chosen according to their ability to fix nitrogen, to produce auxin and solubilize phosphate. The cultivation of garlic meristems in tissue culture with these bacteria was established at a population level of 106 CFU/mL. The evaluated criteria were: (1) the colonization capacity of the bacteria inside the garlic plants determined through scanning electron microscopy; (2) the chlorophyll content; and (3) the growth of garlic plants in vitro post-PGPB inoculation. Volatiles emitted by those isolates inhibited fungi growth. The inoculation of garlic meristems with Enterobacter cloacae and Burkholderia cepacia promoted an improvement in the growth and physiological attributes of garlic, indicating the feasibility of their application as plant growth promoters for commercial cultivation.

[This is a scholarly paper behind a publisher's paywall. Anyone wishing to read the paper will have to get access through a library with the ScienceDirect database or purchase a copy online. Without access to the paper, it is helpful to look at the conclusion (short, quoting as fair use) acknowledging the effectiveness of garlic when promoting plant growth.]

Bacteria of the genus Bacillus and Enterobacter were predominant in the garlic root. M9A (B. subtilis), M13C (B. megaterium), M18B (E. cloacae), and M19B (E. cloacae) showed more significant potential as PGPB due to their ability to produce auxin, solubilize phosphate, and fix nitrogen. M19B (E. cloacae) and CCMA0056 (B. cepacia) stood out as promising in promoting garlic plant growth in tissue culture. The PGPB inoculation in the tissue culture proved to be efficient, allowing for the observation of the effects of the bacteria on the promoted growth in garlic seedlings.