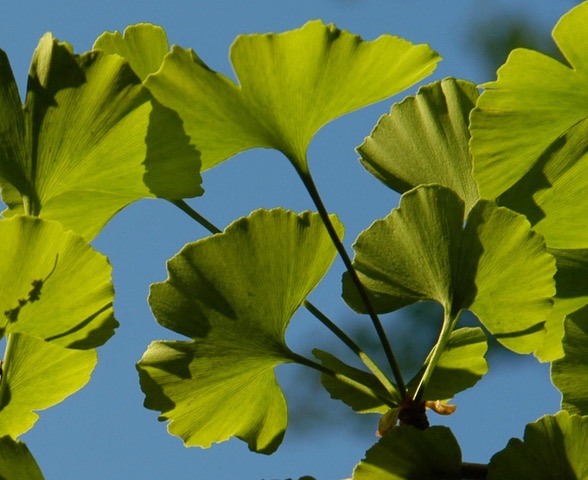 From: ResearchGate (read or dowload full text PDF)
Abstract: A male Ginkgo tree at Kami Yagisawa, Minobu-cho, Yamanashi Prefecture, Japan, is shown to possess a small, localized, branch that produces ovules that mature into viable seeds. This tree is recognized as an Ohatsuki Icho because of the occasional production of pollen sacs on otherwise normal vegetative leaves, but most of the abundant male cones that it produces are of normal morphology. Localized sex conversion, such as that seen in the Kami Yagisawa tree, by which part of otherwise male Ginkgo tree switches to producing seeds, may be more common than has previously been noted. Dioecy in extant Ginkgo biloba most likely evolved from monoecious ancestors that had ovulate and pollen cones on different parts of the plant. This change from monoecy to dioecy has also been accompanied by the differentiation of a ZW system of sex chromosomes (heterogametic females ZW, homogametic males ZZ) in which the W chromosome is slightly larger. The molecular developmental basis for sex conversion in Ginkgo is unknown, but in certain angiosperms a specific transcription factor regulates the expression of the female phenotype. A microRNA, which seems to be male specific, negatively affects this transcriptional regulator, resulting in the suppression of female characters and expression of the male phenotype. Further studies are needed to determine whether a similar or different mechanism operates in Ginkgo, and whether localized disruption of the male specific microRNA is responsible for ovule production on a plant that is otherwise morphologically male.

From: University of Georgia (link goes to a downloadable PDF - must download to read)
There is one family of trees witness to the rise and fall of dinosaurs. This same tree family barely survived the last ice-age. Ginkgo has become a tree without a home -- an exotic wanderer scattered across the globe. Every botanical garden and arboretum worthy of its title has at least one ginkgo tree. Cited as a living fossil, a cultural icon of the Orient, and a tree both bizarre and fascinating, ginkgo shares our world today due solely to human cultivation. Its botanical uniqueness, food content, and medicinal values assure people will continue to cultivate this most antique of trees.

From: Frontiers in Plant Science via the UA National Library of Medicine, National Institutes of Health
Abstract: In plants, sex determination is a comprehensive process of correlated events, which involves genes that are differentially and/or specifically expressed in distinct developmental phases. Exploring gene expression profiles from different sex types will contribute to fully understanding sex determination in plants. In this study, we conducted RNA-sequencing of female and male buds (FB and MB) as well as ovulate strobilus and staminate strobilus (OS and SS) of Ginkgo biloba to gain insights into the genes potentially related to sex determination in this species. Approximately 60 Gb of clean reads were obtained from eight cDNA libraries. De novo assembly of the clean reads generated 108,307 unigenes with an average length of 796 bp. Among these unigenes, 51,953 (47.97%) had at least one significant match with a gene sequence in the public databases searched. A total of 4709 and 9802 differentially expressed genes (DEGs) were identified in MB vs. FB and SS vs. OS, respectively. Genes involved in plant hormone signal and transduction as well as those encoding DNA methyltransferase were found to be differentially expressed between different sex types. Their potential roles in sex determination of G. biloba were discussed. Pistil-related genes were expressed in male buds while anther-specific genes were identified in female buds, suggesting that dioecism in G. biloba was resulted from the selective arrest of reproductive primordia. High correlation of expression level was found between the RNA-Seq and quantitative real-time PCR results. The transcriptome resources that we generated allowed us to characterize gene expression profiles and examine differential expression profiles, which provided foundations for identifying functional genes associated with sex determination in G. biloba.

From: Pharmacognosy Review via via the UA National Library of Medicine, National Institutes of Health
Abstract: Ginkgo biloba (G. biloba) is an ancient medicinal tree species that has been in existence for millennia without undergoing modifications due to its resistance to environmental stresses. Palaeobotanical history showed a wide distribution of the species across the globe but declined over geological time, becoming restricted to narrow geographical range with few surviving individuals in the modern day. The tree is slow growing, adapted to many ecological conditions and shows numerous adaptation in developmental patterns. Medicinal use of the species is attracting research interest, especially the various parts of the tree that are used in orthodox or traditional medicine to treat diseases due to the many bioactive compounds. The primary compounds receiving increasing research interest are the triterpene lactones and flavonoids; these are the target of biotechnological strategies being employed to enhance production. Many genetic and environmental factors have contributed to the endangered status of the species; conservation measures are required to protect it from extinction. In many countries, the cultivation of plantations for the supply of ginkgo leaf-based pharmaceutical formulations is in progress, and efforts to standardize ginkgo leaf extract as herbal medication for human use are being made. Microcuttings and cuttings, cryopreservation, and plant tissue culture have all aided to conserve G. biloba.

From: Asking A Lot
Ginkgo biloba is a strong, long-lived specimen with many uses here in the U.S. It grows as a street tree, on commercial properties, and in the home landscape of many. Sources say it is near perfect as an urban tree goes, as it can grow and thrive in pollution, resists disease, and is easy to prune. But one thing that’s not so near perfect is its sex.

From: Oak Spring Garden Foundation
From above, the trees appear as a mass of vibrant yellow covering the western corner of Blandy Experimental Farm in Boyce, Virginia. At eye level, rows of tree trunks shade grassy hillocks that abut cattle and horse pasture on one side and a patch of forest on another, all framed by a winding gravel road. Amidst the grass itself, seeds sit enclosed in a pungent, fleshy covering that lends an inescapable aroma to the air of the grove. In China, these trees are called “silver apricots.” In the United States, we know them better by the Chinese-derived scientific name, Ginkgo biloba, or just 'ginkgo.'

Gingko: The Tree That Can Change Sex (good article for kids doing research)

From: Scribol
Many things mark the Gingko biloba, which has survived since the era of the dinosaurs, as a most unusual tree. The ripened apricot-like fruit (consisting of a large seed surrounded by a fleshy pulp) smells like a skunk has squirted its defense bladder on a pile of three-day-old rotten-egg vomit. Step on one of these squishy seeds and your shoes are history! Only female Gingkos produce this fruitlike seed; the male Gingkos produce pine-tree-like ‘sperm’ cells that float on the wind like dust. Neither male nor female tree produce flowers; therefore the Gingko is technically a deciduous gymnosperm instead of the more modern angiosperm (flowering) plants which it resembles.

Why Do We Keep Planting Stinky Ginkgos?

From: Slate
They may smell bad, but they do just fine in urban environments.
Each autumn, foliage-starved urbanites are treated to a spectacle of color as the fan-shaped leaves of the ginkgo trees lining their streets turn a brilliant shade of gold. But the treat comes at a cost: When the female ginkgo trees shed their leaves and berries, they rot and emit a stench often likened to dirty gym socks, vomit, or poop.

From: New York Times
Q. The female ginkgo tree on my street is dropping its smelly fruit on the pavement. Is there no way that the sex of a tree can be determined before it is planted?

A. It is scientifically possible to determine whether a young Ginkgo biloba tree is male or female, but a DNA test would be far too expensive for routine use.

From: Arboriculture & Urban Forestry (link downloads a PDF file to read)
The ginkgo (Ginkgo biloba) has been a popular landscape tree in the United States ever since its introduction in 1 784. Aside from the selection and propagation of male cultivars (5), there has been relatively little practical research in ginkgo in recent years, probably because most of the planted trees existed in streetside locations or as scattered individuals. Therefore, we were most anxious to take advantage of a unique opportunity to study a forest-type planting of ginkgo.

Anyone had a "certified male" Ginkgo product fruit?

From: Houzz (topic & thread discussion)
I used to specify Ginkgo a lot. It seems that it is billed as the next saving grace for urban streetscapes and difficult sites. But after watching them grow, I am less impressed. Sure, I see the occasional large and grand Ginkgo in a yard or park, but most of them used in streetscape scenarios often disappoint. They are slow to grow and often spindly. If they get ANY mower/weedwacker damage then that will slow them down even more.
The biggest disappointment is seeing 20% or so of the "certified male" trees begin producing fruit after 6 or so years. No one wants to smell that vomit odor when window shopping on that main street retail sidewalk. Then the shop owner is pushing the City or landlord to remove the tree. All this has pushed me to stop using this tree most of the time.