Researchers made an astonishing discovery in the 1990s – one that would change the direction of medicine in previously unforeseen ways.

Think of your ECS as the conductor of an orchestra. Your organs are the orchestra.

This communication involves a two-part system. It takes place through messenger molecules – called endocannabinoids – that your body produces and the doorways, or receptors, on every cell that accepts them.

Researchers have mapped out the CB1 and CB2 receptors in the human body, as shown in the diagram below. As you can see, there are many – more than 1,000 in total! They’re located largely on nerve cells in your brain and spinal cord, but you can also find them in your organs and tissues, such as your spleen, blood cells, and gastrointestinal and urinary tracts.

You have receptors in your brain and spine, and throughout your body. 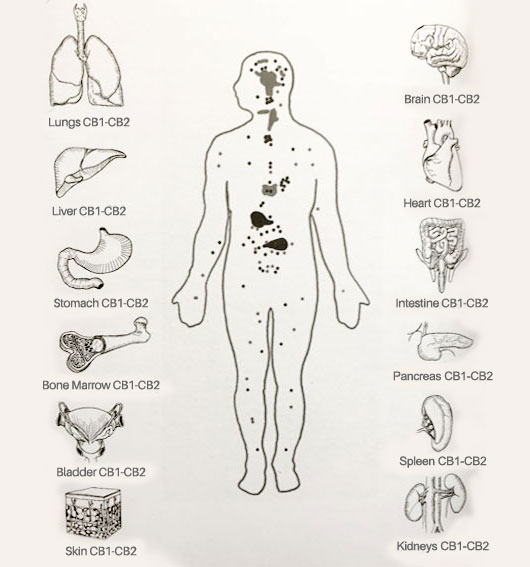 As part of your ECS, your body produces two types of endocannabinoids: anandamide and 2-AG. These are transported into your cells through the CB1 and CB2 receptors.

Have you ever experienced that ‘feel good’ sensation that can occur after strenuous exercise? Some people call it a “runner’s high.”

Most believe that lifted mood comes from a release of endorphins. Researchers now know it’s also from an increase in anandamide. Anandamide targets your CB1 receptors as well as your opioid and endorphin receptors.

2-AG is a workhorse in your body. Especially important for transmitting signals across your brain cells, levels of 2-AG run about 170 times higher than those of anandamide.

When 2-AG activates your CB1 and CB2 receptors, it influences many of the same functions as anandamide. 2-AG supports your immune health, brain health and insulin sensitivity.

CB1 receptors are found mainly in our central nervous system (the spinal cord and brain). Their activation is associated with cerebral and behavioral effects, and they play a direct role in memory and cognition, emotion, motor control, appetite stimulation, and perception of pain.

Cannabinoid receptors are activated by cannabinoids, generated naturally inside the body (endocannabinoids) or introduced into the body as cannabis.

After the receptor is engaged, multiple intracellular signal transduction pathways are activated.

Anandamide and 2-AG are essential for your physical, cognitive and emotional health.