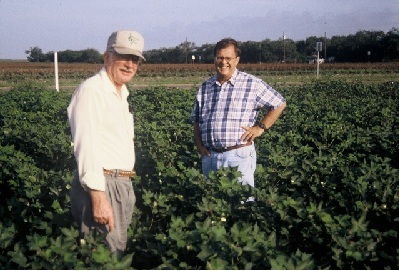 Organic production is a holistic system and must be researched as a system.

The basic assumption of organic production is:  improved soil health results in improved plant health, resulting in a plant with increased resistance to insects and diseases.

Success of organic crop production depends upon
1) management of component parts as a system and
2) understanding of the interactions among components of the system.Taking a particular successful component within an organic system and applying within a conventional system will fail.  For example, compost tea to control diseases.

WHY LACK OF ORGANIC PRODUCTION RESEARCH?

FAILURES – Within ARS at Weslaco, Texas

Failures are related mostly to facilities, lack of funding, and administrative management (lack of interest).

First, a history of the Weslaco organic program.

In summary, lack of interest in organic research due to funding and several new Center Directors resulted in organic production research to be discontinued.

Study initiated in CY 2002 at the Sonny and Noreen pecan farm in Comanche County, Texas, near the small town of Lamkin.

Pecan is considered an alternate bearing tree.  With the organic system, with time the yield difference between years decreases.

Across years and varieties, in general the poulty litter + mycorrhizal fungi treatment resulted in the greatest yield.  (Both were incorporated to a depth of 8 inches with an Aer-way plow.

In 2008 [the last year of the study and a lower yielding (off) year}, the compost treatment doubled yield compared to the chemical fertilizer control.  [22.3 vs. 11.8 pounds per tree for the Pawnee]

Nut weight and nut quality was always increased by the organic method.

In  2007, the Albrecht chemical fertilizer system had the greatest yield.

In 2008, the Albrecht chemical fertilizer system and the Albrecht organic fertility system were the top yielding plots.  Conclusion:  the organic system takes some time, depending upon initial soil conditions, to result in best yields.